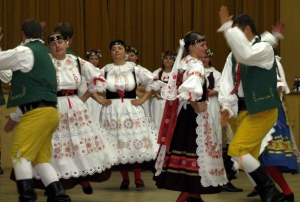 David has made numerous trips to call for dancers in Europe. In most places, the interest is in traditional squares and contra dances, with some opportunities to do English country dance. Callers have found that a steady diet of contra contra contra is less welcome there than in most American venues; European dancers enjoy a mixture of contras, squares, triplets, and dances in other formations. It's not unusual for dancers to wait to hear what the next formation is before lining up.

David has called eight times at the country dance festival in Prague, and has led nine trips for dancers to the Czech Republic. He works in conjunction with the Dvorana dance and travel group. Each tour has a unique itinerary. In 2019, we visited Krakow, the High Tatras region of Slovakia, and traveled back to Prague. To get an idea of a typical excursion, you'll find complete information (itinerary, travel details, pricing, registration) for the 2020 trip. If these are of interest, be sure to sign up on the Dvorana contact page. This will ensure that you receive early notification of the next trips. Feel free to This email address is being protected from spambots. You need JavaScript enabled to view it. if you have questions or need additional information.
Here is a slideshow of photographs from recent trips.

"The first time I called for American dances in Prague," he says, "I thought, 'This is very strange, to be in central Europe doing American contras and squares.' Then I realized that it's no stranger than an international folk dance group in Boston enjoying Balkan dances."

Outside of England, the country with the most active country dance community—they think of themselves as "traditional square dancers"—is Denmark. David has been a featured caller at the major country dance festivals there as well as at numerous local events. On a per capita basis, at the height of this movement there were more folks enjoying traditional American squares and contras in Denmark than in any other country, including the US. Out of a country of 5.5 million people, there were about 75 working callers at any given time, and some 500 people have been trained as callers over the past 30 years.

Indeed, this emphasis on training callers was one of the distinctive aspects of the Danish dance scene; there were frequent callers' classes offered, and experienced callers got together for additional workshops with visiting American callers; in addition, at the start of each new season in September, they gathered for an "inspiration course" focusing on a particular topic.

The interest in traditional American dance was the result of leadership initially provided by Margot Gunzenhauser, an American who has been living in Denmark for decades; she was honored in 2007 with the Lifetime Contribution Award from Country Dance and Song Society.

There used to be four major dance weekends held in Denmark each year. Of these, only the Silkeborg event is still going:

Two good sources of information for contra and traditional square dances in Denmark are here and here.

Update, August, 2017: The traditional square and contra dance scene in Denmark is now in a downward trend. Most of the major weekends are no longer held and overall interest is slowing down. Dancers are aging and the community is having a hard time recruiting newer and younger ones to take their place.

Elsewhere on the continent

You can also find regular dances and special weekends in Switzerland (near Zurich, there's a monthly dance with good live music), Belgium, and the Netherlands. Travelers may also enjoy this general calendar of dances in Europe and Charlie Seelig's listing of overseas venues and groups.