A Night to Remember

Wow! What an evening THAT was!

Northern Spy finished our monthly series with a gala 35th anniversary party on November 14, 2015. Tracy Hall was packed on Saturday night, as a large crowd turned out to celebrate the end of our dances. Included in the mix were eight former members of the band, and many, many dancers from years gone by. Spurred in part by the great publicity given the event by the Valley News, we also had a good number of beginners present.

The evening started with a potluck supper attended by more than 75 people, with entertainment provided by the Revels Teens from Revels North. Dancing began promptly at 7:30 PM, half an hour earlier to make it possible a) to squeeze more dances into the evening and b) to have plenty of time for the dessert break. (Yum! Thanks for all who brought goodies.)

We should have thought of taking a photo at the peak of the evening, but we didn't until after the break, by which point the crowd had thinned out a great deal. Still, here are some of the folks who remained, with others cleaning up the food downstairs.    Download hi-res - 2483 x 1845 pixels - 3.6 MB image here. 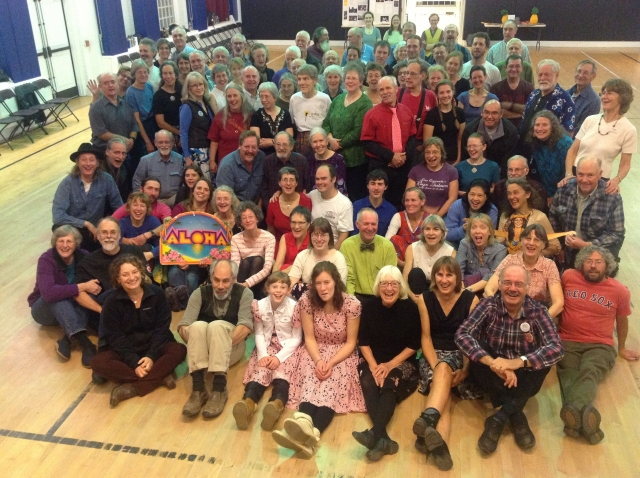 Last spring, when Cuckoo's Nest announced the end of its dances and when Northern Spy decided that it, too, was tired or organizing its own series, we were concerned that this might spell the end of Norwich dances. As we had hoped, though, many community members stepped forward and the dancing will go forward. There's now a new website promoting dances on 2nd and 4th Saturdays, as well as an active Facebook page. The organizers are interested in presenting a mix of programs, some featuring local musicians and callers and some the bigger-name traveling bands and callers. I'll still be calling locally from time to time, including some summer dances at the Pavilion, and the various musicians from Northern Spy may appear in different configurations. In the meantime, support your local dances!

Thank you, everyone, for making the evening such an uplifting experience. Saturday night's program included a number of dances written by Ted Sannella, since that month marked the 20th anniversary of his death. Dances marked with an asterisk are shown in this video sampler from the evening. Here's what we danced:

Wonderful piece of piano wizardry, captured by Doug Plummer and his iPhone: it's musicians Aaron Marcus and Julie Vallimont jamming on the classic Fisher's Hornpipe, four hands on one piano. Enjoy!

I recently came upon a well-written and decidedly opinionated piece about good dancing. Since the opinions reflect much of my own thinking on the subject, I'd like to draw your attention to it. Written some twenty years ago by a respected caller of contras and squares, a choreographer ("Al's Advice" is a classic contra written by Paul) and a fiddler (Volo Bogtrotters), the article presents six concise points.

"A good dancer has complete awareness of how it all fits together: the music, the calls, the figures, his/her partner, neighbor, corner, opposites, etc., the whole set, the whole floor, and, maybe most importantly, his/her own body and all its parts. There are lots of things that the good dancer does that are seemingly unknown or totally unimaginable to many twirl and barf dancers."

Don't take the dancing too seriously

I coordinate the Square Dance History Project, which among other things helps provide me with a useful perspective on the contra dance scene. Square dancing was huge, involving far more people than today's thriving contra scene, and this at a time when the population was far smaller. I just returned from calling at the Flurry festival in Saratoga, where the main hall might have eight contra lines, each 20 or even 30 couples in length; that'd be maybe 500 people dancing in one huge and packed room. But I've spoken with square dance callers who remember calling for as many as 800 squares at one time—do the math! Some have estimated that between 15 and 30 million Americans were involved as square dancers, and the activity spread to other parts of the world.

Modern square dancing is on the decline; the reasons for that are numerous, beyond the scope of this post. I do think, though, that those of us in the contra scene might do well to be aware of that history and to learn what lessons we can.

Here's an interesting commentary from Come Square Dancing, a 48-page tabloid published in Australia in 1953, as that nation was experiencing its own square dance boom. (Those who don't want to download the entire publication can read a brief summary describing how the Australian dance scene developed.)

Just one word of warning
Square dancing is fun—clean, wholesome fun—keep it that way. Above all, don't let it become an obsession.

It has been going for a long time in the small, homey clubs, where married folks meet regularly, learn new steps, meet new friends, and generally spend a pleasant evening. That is the way square dancing began, and in that form it will continue to be popular for a very long time.

The people who rush into it madly are the people who turn it into the "craze" which eventually kills it. They are the type of people who always want to go one better than the next person. They want to join as many clubs as possible, learn new steps as fast as they can, and bring in that "competitive" spirit that destroys the friendly club atmosphere.

And don't take the dancing itself too seriously. Always remember your days as a beginner, when everyone laughed at their mistakes.

If you finish an evening's dancing feeling that you have not enjoyed yourself, one of three things is to blame:

A friend recently forwarded comments from the English country dance listserv; people were talking about videotaping dances so that others could see how dances work. I passed along these comments:

I want to emphasize what most people on this list already know, that it's much more fun to dance than it is to stand behind a tripod. That said, it's helpful to maintain perspective; taking occasional time away from dancing to create a good record to share with others--both now and for the future--is a useful service to the dance community.

I certainly agree with many of the comments expressed by others in this thread. We've all seen the way that dance gets mangled by television crews, for example, who edit audio and video with no sense of how the two fit together.

When we started recording footage specifically for the Square Dance History Project, we tried to follow guidelines put forward by Mike Seeger, one of the producers of Talking Feet, a documentary about Southern solo dance styles. Seeger urged videographers to create documentation of dancing, rather than about dancing. For shots of individual dancers, he recommended full length body shots; for figure dancing, showing the set.

Audio: One of the common sayings of videography is that the video tells the story, the audio conveys the emotion. I find the most effective results, if you're willing to take the time to set up with the necessary equipment, is to record the musicians-- and maybe the caller-- direct from the mixing board and also to have an external mic to record ambient sound from the hall. That input needn't be turned up  a lot, but just a bit adds so much of the feeling, the occasional footfall, laughter, the sound of the room breathing, all the human qualities. Without that, with just audio from the board, it's like watching the dancers through a one-way mirror.

Interested readers can see 100 dances recorded at the 2011 Dare To Be Square event at the John C. Campbell Folk School in Brasstown, NC. We specifically asked our videographer to position the camera on a tripod and to stick with one set whenever possible. In addition to being a skilled videographer, he was also a dancer so when he saw a set having difficulty, he'd instantly move his camera to another to better show how the dance was supposed to work.Here's one example, filmed from on stage.

Sometimes it's not possible to film from the stage, but focusing the camera on one group makes it a lot easier to see the action.

Again, repeating Seeger's words, don't let the quest for perfect equipment stop you from getting started. Practice, and look at your footage critically to improve.

I think the main takeaway is to film with intention.