Contra Dance diaspora: A collection of stories about the spread of contra dancing 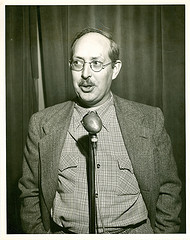 How this collection came to be: My work on the Bob McQuillen documentary, Paid To Eat Ice Cream, helped me realize how many stories of the previous generations of dancers had been lost. The New England Folk Festival one year held a "Remembering Ralph Page" session that attracted fewer than two dozen participants. Some potential participants were committed to other workshops at that same time, to be sure, but many of the people who had danced to Ralph Page simply were no longer alive. As I continued to search for photographs and films and stories from earlier eras of traditional squares and contras, I resolved that no matter what I was able to locate, at least I could ensure that more recent generations left a better record of their involvement.

In 2004, I was asked to write the liner noted for the Contra Roots and Branches CD; this was a compilation album that showcased contra bands from all around the US. In preparation, I sent e-mails to the many musicians, asking, among other things, how they first started playing this kind of dance music and how contra dances in particular arrived in their part of the country. I knew that so much of the spread of contras across the country had come in the post World War II era, and in particular, starting in the 1970s. This was my generation, and I knew that many of the key players were still available to be contacted. I joked that I wanted to collect the stories before we all enter the Alzheimer's unit. I enjoyed reading the responses, and embarked on a program of reaching out to other regions to collect more stories.

The process was simple: I'd pick a part of the country and would contact someone I knew there to ask for their stories. If it was a region I didn't know at all, a quick web search would reveal information about local dance series, from which I could harvest a few contact names. One person's response would inevitably mention others, and then I'd contact them for additional information.

Here's one version of the generic letter that I'd send along, explaining the project:

I’m writing to ask for your help in assembling an archive of stories connected with the spread of contra dancing in recent decades.

For many years now, I've been interested in the rapid spread of contra dance to diverse portions of the country. It's a recent enough phenomenon that most of the key players are still alive and I'm contacting folks in other parts of the country to see what I can learn about this. Working on my recent videotapes about Bob McQuillen and Dudley Laufman, each with a strong connection to Ralph Page, has helped me realize how much information we’ve lost about our dance heritage in earlier decades of the twentieth century; I’m hoping that our current dance scene leaves behind a better record.

There have been several waves of contra dance expansion in the last fifty or sixty years. One came in the 1940s when Ralph Page took contra dancing from the Monadnock region of NH to the Boston area, where it intersected with returning GIs as well as folk dancers and the various collegiate outdoor clubs. Ralph's influence also spread via international folk dance circuits through his time at Maine Folk Dance Camp and at such venues as the Stockton, CA, folk dance camp.

Ralph’s work led to the even bigger wave, the influence of Dudley Laufman's calling in the late 1960s and into the 1970s, when many people my generation discovered this kind of dancing. This group has been influential in spreading contra dance across the US in the past three decades.

For example, Dudley dancers took contras to San Diego in 1971 (which later spawned contra dances in Santa Barbara) and Nick Harris, another Dudley dancer, started the dances in Palo Alto in 1974-75. A high school student (Dillon Bustin) danced with Dudley and brought contras to Bloomington, Indiana, in 1972, which in turn had a big influence on Chicago and St. Louis and other parts of the midwest. And then, in the last 20 or 25 years, the number of dances has mushroomed all around the country.

What can you tell me about the arrival of contras in the _____ area ? Who were the responsible folks? How had they in turn become familiar with that form? What were they trying to accomplish? What was it about the contra dance scene that was so appealing? (Note: to be clear, I'm not just interested in entire evenings that are billed as a contra dance, but also in the form itself. Some groups do American contras along with English country dance, while in other settings contras have become part of evenings of mostly squares, and then there are even contras that turn up in an international folk dance evening.)

I'm not sure just what I'll do with this, but at least there may be a nice series of articles for the newsletter of Country Dance and Song Society. Several people have suggested a book, and while there’s certainly a history of contra dance to be written, that may be a project for a dance historian of the future. I'll print the responses I get and save the information as well in electronic format in the New Hampshire Library of Traditional Music and Dance, housed at the University of New Hampshire. This library is also home to the CDSS archives, the Ralph Page Collection, the Ted Sannella Collection, as well as thousands of recordings, personal papers, photographs and much more from other noted dance leaders..

At the moment, the file that compiles all the responses to date is more than 400,000 words, nearly 800 single-spaced pages. Some folks have sent in a few paragraphs; others have sent lengthy responses. In some cases, we have detailed, researched histories of a particular series; in other cases, people have submitted very personal recollections. All are welcome.

Thanks for any memories, stories, dates, details that you can share, and I'd also love contact information for other folks who can contribute to the rest of the story. It's like trying to record a complex family history!

As I mention in the cover letter, I tried to keep my focus on contra dances, although I was aware that contras were inevitably going to be mixed in with other forms of social dance. I figured that limiting things to contras would also make this more manageable; I knew enough about square dancing and its deep roots throughout American history that trying to do something like this with squares was a far more ambitious project. (Bob Brundage did a superb job conducting interviews that trace the history of modern western square dancing, available on the website of the Square Dance Foundation of New England. Squares in general present a far more complex history. The great thing about contras is that the modern boom is so, well, modern; it's possible to trace fairly accurately when and how contras came to many parts of the US since the key participants are still around, something that won't be the case 50 years from now.)

Electronic communication certainly made this task much easier; I've frequently said that I was collecting oral histories without having to do any transcribing. (That said, there are a few entries here that were sent to me by honest-to-goodness U.S.P.S. mail, and a few audio transcriptions.)

Someone, someday, will want to write a history of the spread of this kind of dance. Rather than relying on membership lists and newsletters, I want that person to have access to the stories of the people who moved the dance along, to hear their voices. So, simply, I started asking others to share their tales, and people responded eagerly. In some cases, you'll find meticulously researched and condensed histories of a local dance series; in others, there'll be a more personal story of how a particular individual discovered the music and dance and how this changed their life. When inviting others to participate, I kept the invitation informal, making sure that folks knew that all forms were welcome.

In some cases, the reader will discover different viewpoints from the same city. Person A claims responsibility for starting things, Person B counters that he or she was responsible, and Person C has a different perspective. I've made no attempt to reconcile such viewpoints, choosing here to let the various voices speak for themselves. I'm also aware of gaps in the record; despite several attempts, for some major centers I wasn't able to get a key individual to contribute his or her perspective. In addition, there are parts of the country that I've missed, skipped over, or just ran out of steam. Perhaps others will take up this project and will fill in the blanks.

As I read through the collected responses, a few names kept cropping up over and over again, none more frequently than that of Dudley Laufman. Indeed, it was this collection of stories that reinforced my belief that Dudley was perhaps the most important individual—even more than Ralph Page—in bringing about the beginning of the contra dance scene as we know it today. That in turn pushed me to start work on my video about him, The Other Way Back, which was released in 2007.

In addition to the stories collected in the archive, the many videotaped interviews I conducted for my contra dance video documentaries will end up at the UNH Library of Traditional Music and Dance. The library already has audio dubs I provided from some interviews, and in some cases there are now transcriptions of those interviews. UNH will also end up with the logs I kept of my interview footage; those logs aren't word-for-word transcriptions but do provide a rough idea of the subject under discussion at various points in the interview.

There's still far more work to be done on this project, but I'm finding my attention drawn elsewhere. I've organized information in rough geographic categories, but there are probably more tweaks that can be made. Ideally, this should be turned into a hypertext document, so that readers could jump from one section to another. That's a job for someone with more patience—and more tech skills—than I have.